The BiObernai Beer was born of the wish of the BiObernai’s organization team, 100% organic, local and craft. The project has been possible with a successful fundraising campaign.
Nearly 100 contributors (companies and individuals) have been mobilized under this project, enabling to collect over 12,000 Euros for its official launch in October 2016, in partnership with Saint-Pierre craft brewery.

So far, the BiObernai’s Beer is marketed by several local retailers, organic supermarkets, restaurants, bars as well as in the Saint-Pierre Brewery .
From now on it will be the official beer of the event and will also be associated to several other events related by BiObernai.

BiObernai’s Beer recipe was specially designed and created by Cédric, brewer at the Saint-Pierre Brewery (a small village in Alsace / France)
The floral note given from the organic Alsatian hop characterizes this blond beer, 100% organic, which add a slight of bitterness.

Thirst-quenching and composed of a mixture of three different malts carefully selected, the BiObernai’s Beer has a delicately golden robe and a malty taste.

Where to buy it? Where to drink it ? (in France / Alsace only)

Official launch of the BiObernai Bier in October 2016 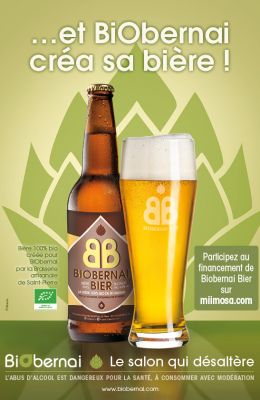